Artist Collaboration at The Blackstone

My paintings along with the works of Chicago artist CJ Hungerman are on exhibition at The Blackstone Hotel through September 23rd, 2013.

The Renaissance Blackstone Chicago Hotel
636 South Michigan Avenue
Exhibition is in the Art Hall on the 5th Floor
Chicago, IL 60605

This exhibition was curated by Indiewalls out of New York and I have to say that they have been totally wonderful to work with.


For the opening, CJ and I created 2 collaborative paintings that were auctioned off with the proceeds going to benefit art in education at the McClellan Elementary School in Bridgeport.

We both started a 30 x 30" artwork and then half way through switched and finished each other's painting. This turned out to be a pretty fascinating exercise. I was surprised by how self-conscious I felt working on another artist's piece. Painters don't tend to naturally  collaborate so this took me out of my comfort zone in a really good way.

I finished the top artwork on the left. It's a kind of Danish Modern meets Comic Book Crazy titled "Alien Invasion of Geometric Landscape".  CJ gave me such a tight and fully developed artwork that I decided to just enhance and support what he had already done through color and geometry. I thought the final piece was really dynamic and am happy to report that there was a bit of a bidding war for it. (both artworks sold that night - yes!)

As I look at these 2 pieces now, I can see how both of us responded pretty strongly to the start we were given, which ended up in 2 strangely cohesive artworks. We plan to do more collaborative work in the future - next up a large scale painting. Stay tuned...


Thank you so much to everyone who came out and supported me during the opening - especially my collectors - you know who you are :-).

Posted by Pamela Staker at 3:25 PM No comments:

From time to time I branch out from creating my own artwork and help my clients develop exceptional contemporary art collections. Below is a... 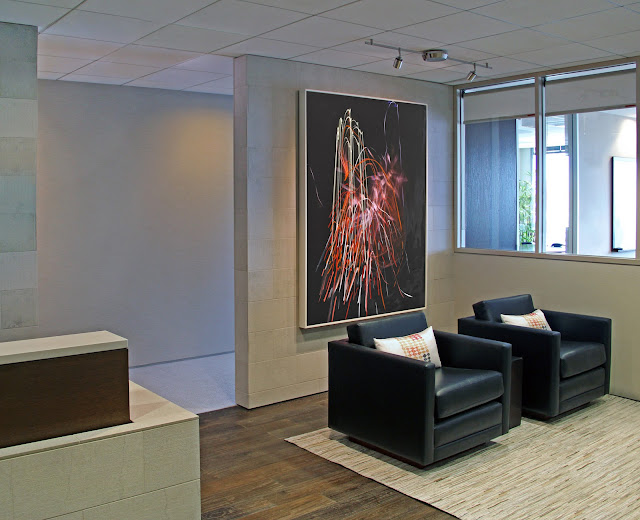